I Know why the Sky is Blue. Do You? Marking the 200th Anniversary of the Birth of John Tyndall 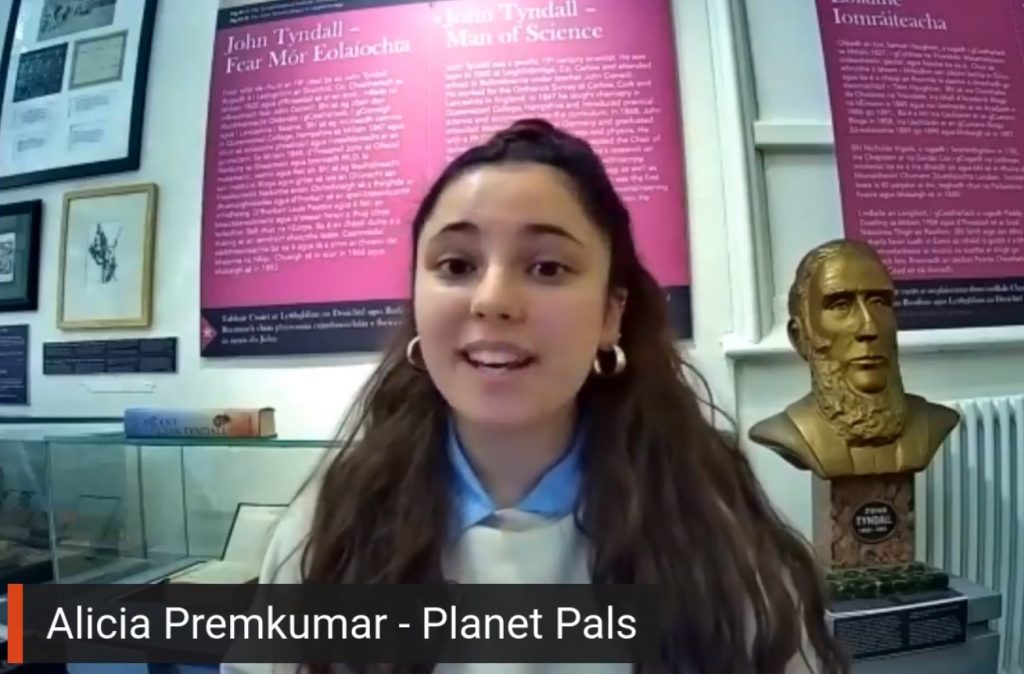 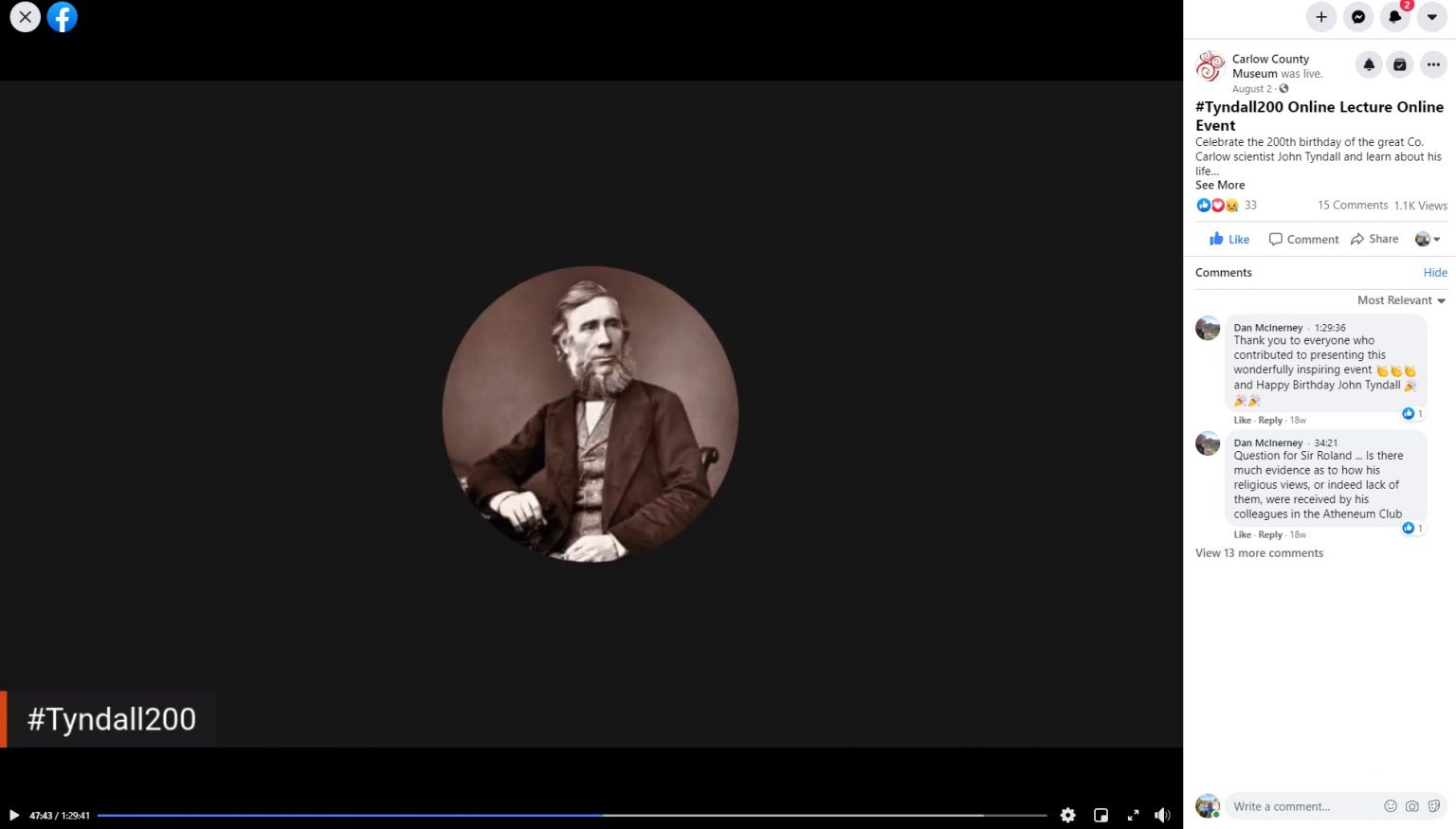 Left and Above. Alicia Premkuma, MC of the #Tyndall200, which was live streamed on Facebook on John Tyndall’s birthday, 2nd August 2020

In early August 2020, Carlow County Museum in association with the Tyndall National Institute, marked the 200th anniversary of the birth of County Carlow’s great 19th century scientist, inventor, educator and mountaineer, John Tyndall with a series of online lectures, streamed together in one broadcast, titled ‘Tyndall200’.

Who was John Tyndall?

John Tyndall was one of Ireland’s great scientists and discovered among many things the science of climate change and why the sky is blue. He also developed the sterilisation method called Tyndallisation and published among the first books in English on mountaineering. Such was Tyndall’s significant contribution to science that he even had a peak in Alps and craters on the moon and planet Mars named in his honour. He is therefore a celebrated Carlovian, born in Leighlinbridge, circa 1820, by the banks of the River Barrow and the legacy of his career is very much in evidence to this day.

The streaming of the lectures on Carlow County Museum’s Facebook page coincided with the day of Tyndall’s birthday, Sunday August 2nd, and featured contributions from some eminent John Tyndall experts. These included local Tyndall Dargan Committee member Martin Nevin from Leighlinbridge, who along with other members, has actively promoted John Tyndall for nearly 50 years; Sir Roland Jackson, author of Tyndall’s biography ‘The Ascent of John Tyndall: Victorian Scientist, Mountaineer, and Public Intellectual’ and Julie Donnelly, Head of Access Programmes, Tyndall National Institute. The broadcast also included Professors Tatiana Perva and Louri Gounko from Trinity College, Dublin, schools of Engineering and Chemistry. Local student, Alicia Premkumar, was the MC of the event and talked about Tyndall’s influence on her a young student, leading to her interest in environmentalism with the group Planet Pals.

In the first lecture, Martin Nevin opened proceedings by speaking about his work with Dr Norman McMillan and several other colleagues from IT Carlow and Teagasc Oak Park in promoting John Tyndall through the Tyndall DarganCommittee since the 1970s. He also gave an outline of how a joint Tyndall Dargan exhibition was coordinated by the committee in 1981 and was the main feature at that years Young Scientist Exhibition in the RDS, Dublin.

Sir Roland Jackson, a Visiting Fellow of the Royal Institution, London, then spoke at length about Tyndall’s life and career, as well as their shared interest in mountaineering, having ascended many of the same peaks as Tyndall. In 2018, through Oxford University Press, he published the first biography of John Tyndall since 1945. The paperback version has just been published. Sir Roland concluded his lecture with a special Q&A session, where the audience asked him a diverse and wide range of questions about Tyndall’s background, attitudes, influences and contemporaries. 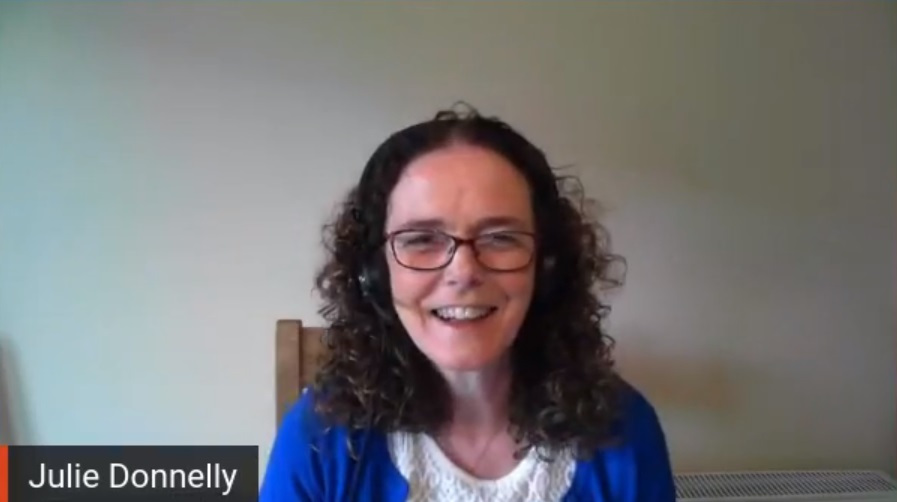 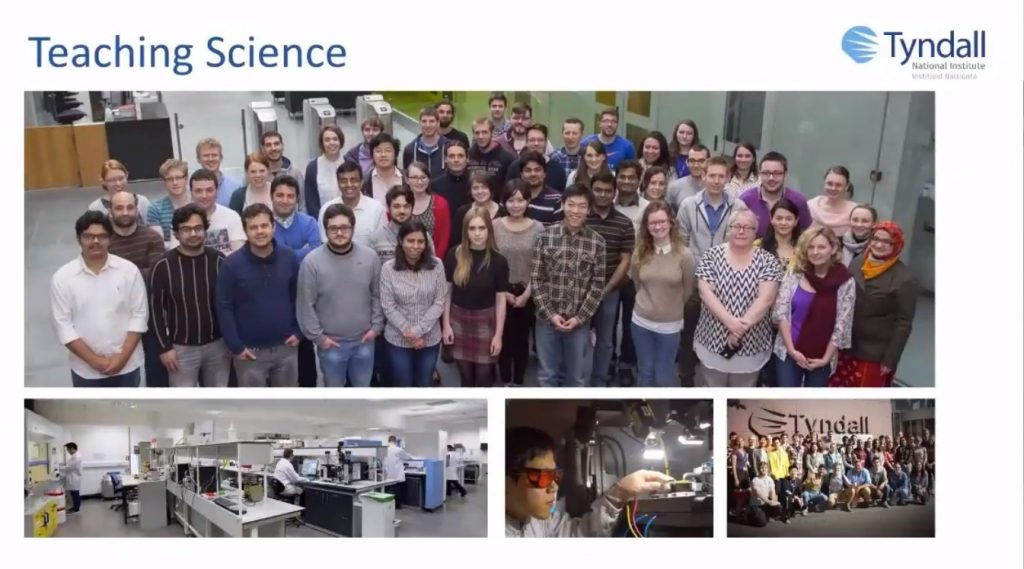 The broadcast concluded with two speakers from Trinity College, Dublin; Professors Tatiana Perva and Louri Gounko from the college’s schools of Engineering and Chemistry, respectively. Both scientists spoke about how they are incorporating research from a Spectrometer developed by Dr Norman McMillan in IT Carlow and based on the research of John Tyndall, into their present-day work. The final segment was a fitting way to conclude the broadcast and underscored how John Tyndall’s ground-breaking scientific research continues to have an important bearing on the world we live in today.

The #Tyndall200 Online Lecture Event is available to view in its entirety below.

The video of the full #Tyndall200 online lecture event is available above.