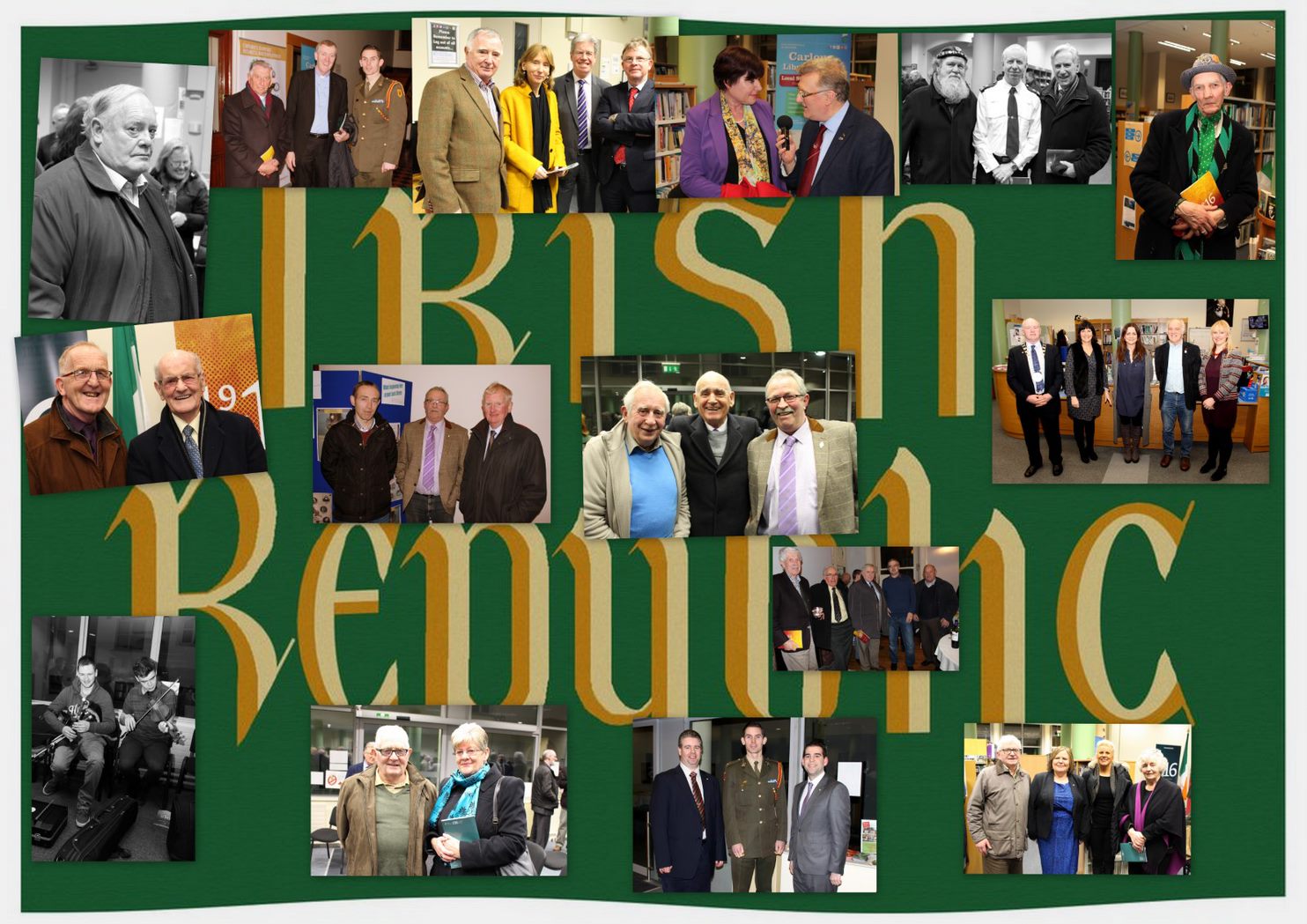 “Ireland 2016” was a year-long national programme to commemorate the events of the 1916 Rising, to reflect on our achievements as a democratic state over the last 100 years and to look towards Ireland’s future.  Ireland 2016, was a year of engagement for everyone on this island.  It was a once-in-a-century invitation to people of all ages, at home and overseas, to shape and take part in a diverse range of historical, cultural and artistic activities, to nurture commemorate, celebrate and debate. This pivotal period in the history of Ireland has had an enormous impact on the development of our nation and our national identity, and it is fitting that we sought to commemorate the people and events in a thoughtful, respectful and consultative manner. The ‘Carlow Ireland 2016 Programme’ saw the county host over sixty events to mark the one hundredth anniversary of the 1916 Rising. All the commemorations individually and collectively remembered key moments in the foundation of this State.

On Sunday April 3rd, 2016 the County Carlow 1916 Commemoration took place outside the Town Hall, Haymarket, Carlow Town.  This commemorative event included the reading of the Proclamation in both Irish and English by secondary school students.

Carlow College, Ireland’s oldest third level Catholic college, held a ‘Memorabilia Day’ where members of the public brought along any items they have relating to the 1916 Rising, the War of Independence and the Civil War period so they could be photographed and record the stories associated with them.

The members of Carlow County Council commissioned two new pieces of public art, one for each Municipal District.

The art commission for the Municipal District of Carlow is located in Carlow County Museum. This innovative and unique contemporary stained glass panel illustrates a Carlow narrative showing some key Carlow figures and the role they played in 1916.

The art commission for the Municipal District of Muinebheag is located at Beachers Hill on the Leighlinbridge Road in Bagenalstown. It is a Carlow granite memorial honouring Fr. Albert Bibby OFM Cap., Bagenalstown and Nurse Margaret Kehoe,  Leighlinbridge for their pastoral and medical care of those who fought in 1916.

As a result of the national focus on 1916 many communities begun to research potential connections in their area with more personal stories emerging. One such individual was Bridget (Brede) Connolly from Friarstown, County Carlow who would appear to be the only Carlow person present in the GPO in O’Connell Street during the Rising. She was a dispatch officer for Cumann na mBan. The “Grange 1916 Committee” unveiled a plaque at her grave in Grange.

Another connection was James Connor, a prominent Carlovian and manager of the Clogrennane Lime Works, who was killed by rebels on Easter Monday on Stephen’s Green for refusing to give up his motor car for a barricade. Dr. Shay Kinsella presented a lecture on his life and unveiled a plaque on the wall of Clody cemetery to commemorate Connor as his grave is unmarked.

The Carlow Federation of the Irish Countrywomen’s Association (ICA) produced a wonderful large wall hanging depicting Ireland’s Achievements from 1916 up to 2016. Various styles of stitching, quilting and embroidery from the twelve guilds of the Carlow Federation were involved in the making of this commemorative piece. The wall hanging is now on display in the County Museum.

The Tullow 2016 Centenary Committee in April 2016, unveiled “The Flame of Liberty” as the community’s response to remembering Volunteer Thomas Traynor, born in 1882 at Cannon’s Quarter, Tullow. The piece was lovingly crafted in metal by locally based company Burnside Autocyl in early 2016 by skilled designers, craftsmen and apprentices.

The first week of April 2016 saw Dublin Street, once the premier trading hub in Carlow Town, return to the busy commercial life of 1916. Shop owners on the street recreated their shop windows and displays reflecting the time and their present-day shop staff wore period dress. A number of no longer trading businesses were recreated such as a printing works, a carpentry workshop and a cobbler. The street was lined with veteran cars, a horse and cart and a steam engine. 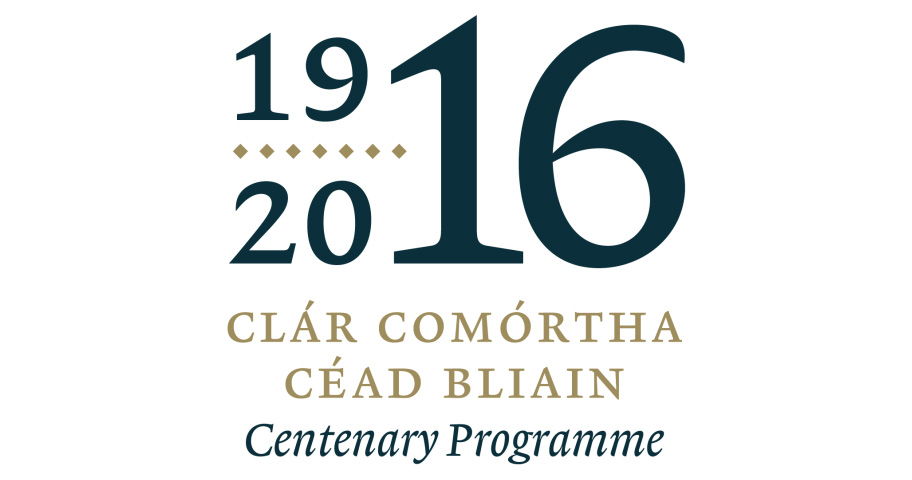 Carlow GAA recreated the two County Finals from 1916 played between Tinryland and St Patricks Tullow in football and Bagenalstown and Graiguecullen in hurling. The two matches saw players, some of who were direct descendants from the 1916 teams, dressed in the replica sports jerseys along with workman boots and caps.

Both matches begun with the traditional throw in with all players lined up in the middle of the pitch. The Most Reverend Denis Nulty, Bishop of Kildare and Leighlin, had the honour of throwing in the sliotar for the hurling game. These recreations made for great viewing for the crowd, many of whom also donned 1916 attire for the special occasion.

The Carlow Library Service held several events throughout their branches including writing and poetry competitions. Through their Carlow Nationalist archive, they produced a series of leaflets that looked at Carlow life in 1916 under the headings of business, sport, farming, church, anniversaries, local interest, medical and the Rising.

ASPIRO Choir, under the direction of Mary Amond O’Brien commissioned composer Liam Lawton to write a Requiem ‘Remembering the Child’ as a living remembrance of children who died in the 1916 Rising and in memory of all children who have lost their lives or childhood through violence, war and oppression.

As part of Heritage Week 2016, the Carlow Historical & Archaeological Society presented three mini-lectures. Ms. Róisín Bowling presented “Uniformity 16, celebrating Cumann na mBan and what they wore”; Mr. Paul Maguire, Curator of Carlow Military Museum, spoke about the uniforms and the arms of 1916 while Ms Imelda Byrne, presenter of television series ‘ICA Bootcamp’ discussed the food of 1916 in ‘The Way We Ate’.

Carlow County Museum in association with the Carlow Arts Office invited primary schools across Carlow to submit their new Proclamations to be printed on an original printing press. The Museum teamed up with Jack and Paul Byrne, father and son, from Newark Printers, Clogrennane, who still have a working hand printing letter press which uses the same technique as used to print the original 1916 Proclamation.