St Willibrord and His Carlow Connection

St Willibrord is the Patron Saint of Luxembourg and the First Apostle of the Netherlands. He is buried in the Basilica of Echternach, Luxembourg, which is the centre of his major continental monastery. Located near in the townland of Garryhundon, Co Carlow, is the archaeological site Rath Melsigi (not publically accessible without the landowner’s permission). During the seventh and eighth centuries this site was the most important Anglo-Saxon ecclesiastical settlement in Ireland. It was here from 678AD to c. 720AD that Willibrord and many other Englishmen were trained for the continental mission.

Through the mists of time his Carlow connection, for the most part had been forgotten, but through academic research by Professor Dáibhí Ó Cróinín, Department of History, NUI Galway over the past thirty years this connection has been re-established. In 2002, Henri, the Grand Duke of Luxembourg, paid a state to Ireland visiting an exhibition in Trinity College about St Willibrord’s connection to Ireland. In 2009, President Mary McAleese as part of her state visit to Luxembourg visited Echternach and spoke of the connection between Echternach and County Carlow. Since then, an active relationship has developed between organisations in both Carlow and Echternach in particular between the Willibrordus-Bauverein and Carlow County Museum, operated by Carlow County Council.

In AD 690 Willibrord led a successful mission from Carlow, made up of Irishmen and Englishmen. He spent his initial period in and around Utrecht in the Netherlands. Later in AD 698 he established his most important abbey in the town of Echternach, present day Luxembourg’s oldest town. As part of the abbey, he established a very important scriptorium and for a considerable period the Abbey produced many of the bibles, psalms and prayer books that are to be found today in the great libraries of Europe. It is likely that the first generation of these scribes were from County Carlow or had trained here. From Echternach he continued to co-ordinate missions to the surrounding countries until AD 739, when he died aged 81 on November 7th, ever since celebrated as his Feast Day. He is buried in Echternach, and he is the only saint buried in Luxembourg.

St Willibrord’s signature is the oldest datable signature of an English person and oldest datable use of Anno Domini (A.D.). Both were written in AD 728 in Echternach but are contained in a book most likely written in Co. Carlow and brought by St Willibrord on his mission. The book is now housed in the Bibliothèque Nationale de France, Paris.

Although Willibrord is relatively unknown in Ireland, much devotion and religious festivals are held to this day in his honour in Belgium, Germany, Luxembourg, and the Netherlands. The most famous is an annual hopping procession, a dance that dates to, if not predates St Willibrord’s lifetime. The hopping procession takes place annually on the Tuesday after Pentecost Sunday and sees tens of thousands of people descending on Echternach to partake along with dozens of Cardinals, Archbishops and Bishops from across Belgium, Germany, Luxembourg, and the Netherlands.

In June 2017, a series of events took place to highlight this important early medieval connection. In early June, the Most Reverend Denis Nulty, Bishop of Kildare and Leighlin and the Right Reverend Michael Burrows, Bishop of Cashel, Waterford, Lismore, Ferns, Ossory and Leighlin, accompanied by Cllr John Murphy, Cathaoirleach of Carlow County Council, lead a joint ecumenical diocesan pilgrimage of nearly sixty people from Carlow to Echternach to become the first know Irish group to partake in the UNESCO World Heritage Status Hopping Procession. While there they were presented with the Relic of St Willibrord, presented by the Most Reverend Jean-Claude Hollerich, Archbishop of Luxembourg (now Cardinal) to honour the historical link.

The Carlow group was wonderfully led by members of the Presentation School Band from Carlow Town under the baton of Edwina Hayden, Music Teacher. The group, like all the groups, hopped in rows of five people joined together by white handkerchiefs. The procession, a physical pilgrimage, is known as the ‘people who pray with their feet’. The Presentation Band and the hopping Carlow pilgrims received a warm welcome from the many thousands who lined the streets to watch the procession, being applauded on many occasions. 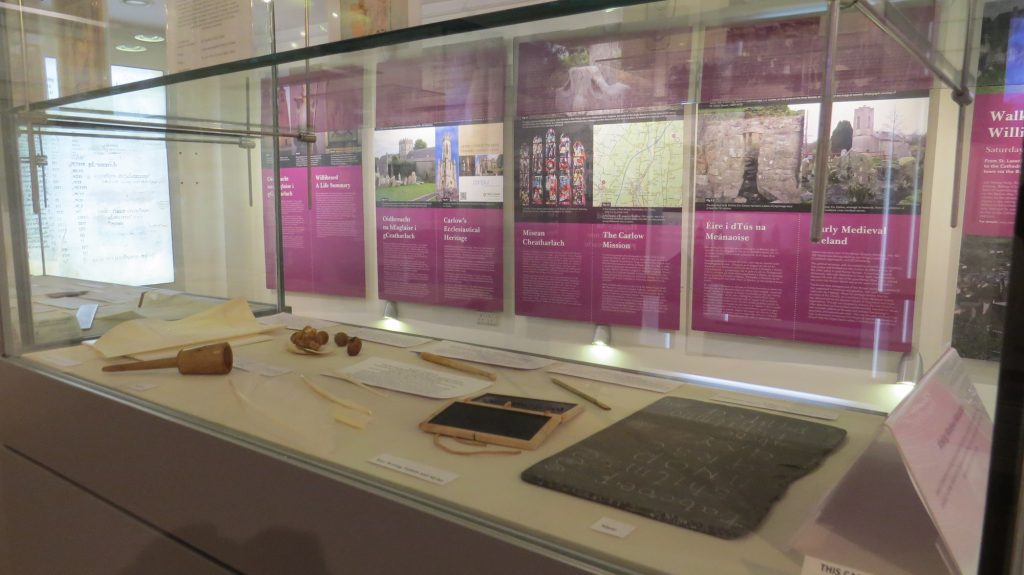 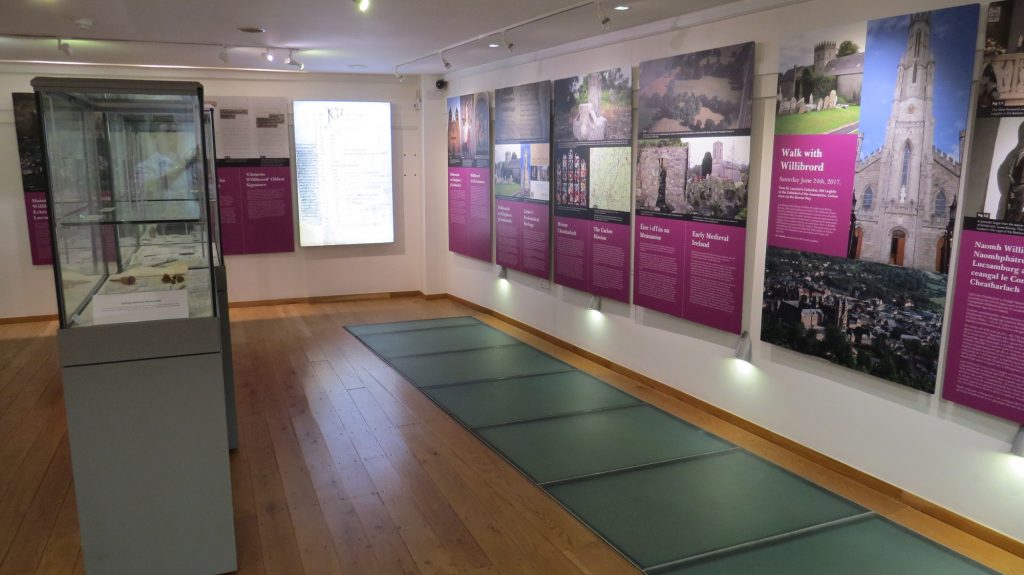 Cllr. Deane, a native of Parish of Tinryland, the present day Roman Catholic parish that encompasses the area that St Willibrord spent his time studying and training, said that ‘while the name of Willibrord and his colleagues may have been largely forgotten about in the wider public imagination, his name or at least the knowledge that an important religious site was in the Tinryland/ Milford area remained somewhat alive in our local lore’.

To mark the joint visits and celebrations the group from Echternach were presented with a vellum manuscript commissioned by Carlow County Council, the Diocese of Kildare and Leighlin and the Diocese of Leighlin. This book was made by Tim O’Neill, one of Ireland’s foremost calligraphers. Through time and for a variety of reasons Echternach no longer has any original manuscripts and this was opportune for the people of Carlow to present a unique handwritten book honouring the recent visits to both countries. The book, which will be displayed in Echternach, contains the words of St Willibrord that he wrote in AD 728 in Echternach in a book he brought from Carlow. The rest of the book gives a brief outline of the historical connection and then lists the near sixty people who travelled from Carlow to Echternach and partook in the hopping procession and then lists the twenty-nine Echternach people who have travelled to Carlow and partook in the ‘Walk with Willibrord’. 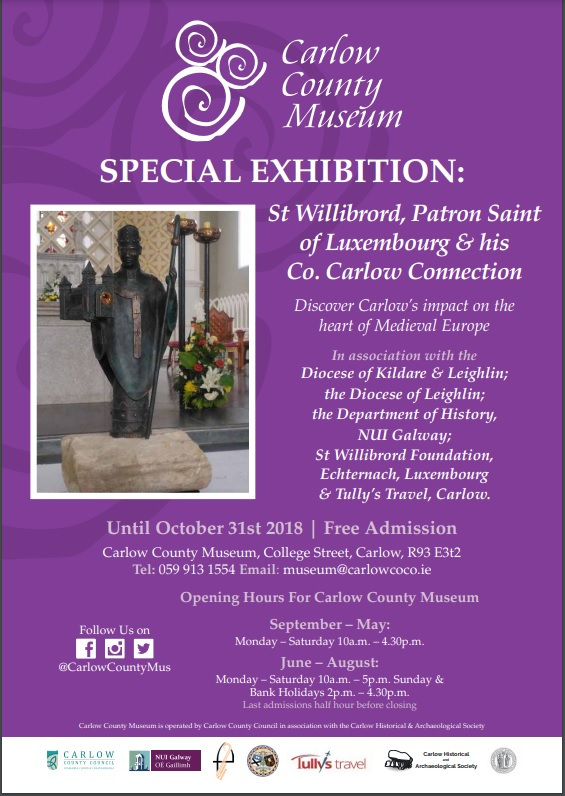