Carlow is a wonderful county full of amazing archaeology  and historic sites.  I recently visited the village of  Myshall  located at the foothills of the Blackstairs Mountains a short distance from the Carlow/Wexford Border. Myshall is  traditionally held to be the birthplace of the great Irish saint St Finian, founder of the celebrated monastery of Clonard in Co. Meath.  An early medieval church dedicated to the saint sits at the centre of the  village.

The church now in ruins is a pre-Norman  structure and only the west gable of the church survives to any great height. Within this wall is a very fine semicircular arch doorway.

The site is also associated with St Brigit. A short distance from the church is  two-basin bullaun stone known as St Brigit’s Stone.

Local folklore  connects this stone to a series of parallel ridges called  ‘Witch Slide’ on the nearby Blackstairs Mountains.

It was said that a Carlow witch had a falling out with her neighbour in Co Wexford and she decided to throw a stone at her. As she began to throw the stone she slipped and fell creating the ridges.  A standing stone in the townland of Clonee was said to be the stone she was trying to throw. It was said the  marks of her knees where she  landed were preserved in the bullaun stone at Myshall.

Outside the graveyard circa 18m from the church is a holy well dedicated to St Brigit. The  well is now dry and its structure has been incorporated into a modern grotto. Both the well and grotto are dedicated to St Brigit.  The Ordnance Survey Letters for Co Carlow state that a  pattern was held here annually on the 14th of September the feast of the exultation of the Holy Cross, the Titular feast of Myshall. The pattern day coincided with the Myshall Sheep fair which was held in the village up to the 1960’s. By the 1930’s  all memory of the traditions of stations or cures had been lost (O’Toole 1933, 13). 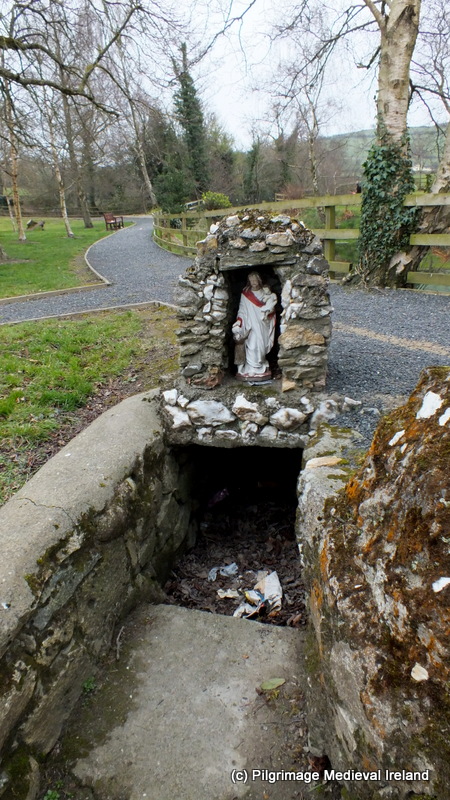 According to O’Toole writing in 1933,  the spring from which the well was supplied came from the graveyard and the spring water flowed from here through a drain under the boundary wall. Three stone steps lead down to the well, and there was a large opening for the overflow.

A few yards from the well there is a large flag set obliquely in the ground; in the centre of this flag there is a round aperture, which apparently was meant to let water pass through while at the same time, acting as a dam (O’Toole 1933, 13).

The area around the well has undergone some landscaping and it is now a feature of an amenity park which incorporates a large pond and water wheel. 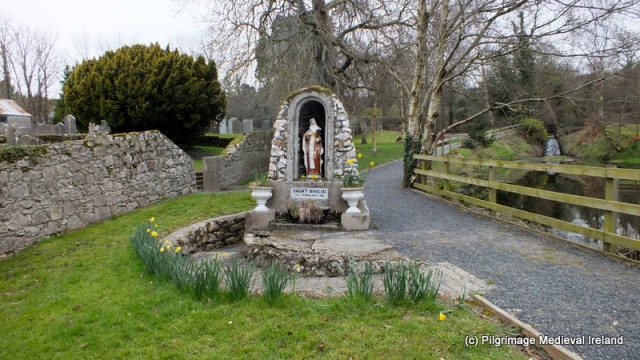