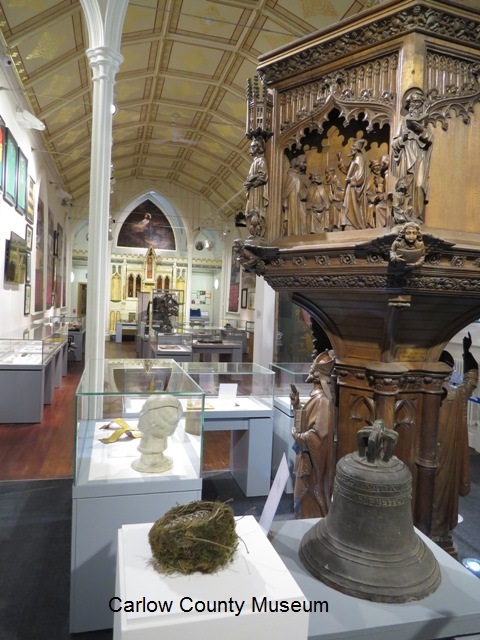 Saidhbhín Gibson outlines her project ‘Sojourn’; a solo exhibition that took place in Carlow County Museum in June 2013. It was launched during Éigse Carlow Arts Festival and supported by Carlow Arts Office.

The exhibition ‘Sojourn’ was the outcome of a longstanding interest to exhibit a body of work in a museum context. This project was installed among the displays at Carlow County Museum creating a trail through the building offering carefully planned juxtapositions between the artworks and the museum’s historical artefacts.

One such piece in the exhibition was ‘Merit’. It was placed amid the Museum’s ‘Mike – the man of the Rás’73’ display. It contained a lively, rotund lichen (Usneas subfloridana) atop one end of a speckled tree bark. At the other end there was a brightly coloured insignia, similar to that which features on certificates. This circular shape mirrored the form of the organic matter while also linking in with the brightly coloured cycling jerseys featured in the museum’s exhibition. The artwork suggested a celebratory status of the organic matter.

‘Lichen gilt’ was another piece in the exhibition that contained similar collected material but of a different species and format. The edge of a decoratively printed saucer was adorned with a Candelaria concolor lichen. The small organic matter contained a number of colours and gave the impression it had been hand painted onto the pottery. The piece was fittingly displayed on a dresser in the museum’s kitchen installation. Many of the pieces in the exhibition brought the outdoors inside to inhabit our surrounds and indeed, be viewed along side the preserved and protected.