Her Excellency, Florence Ensch, Ambassador of the Grand Duchy of Luxembourg to Ireland, visits County Carlow and reconnects with out joint medieval Heritage 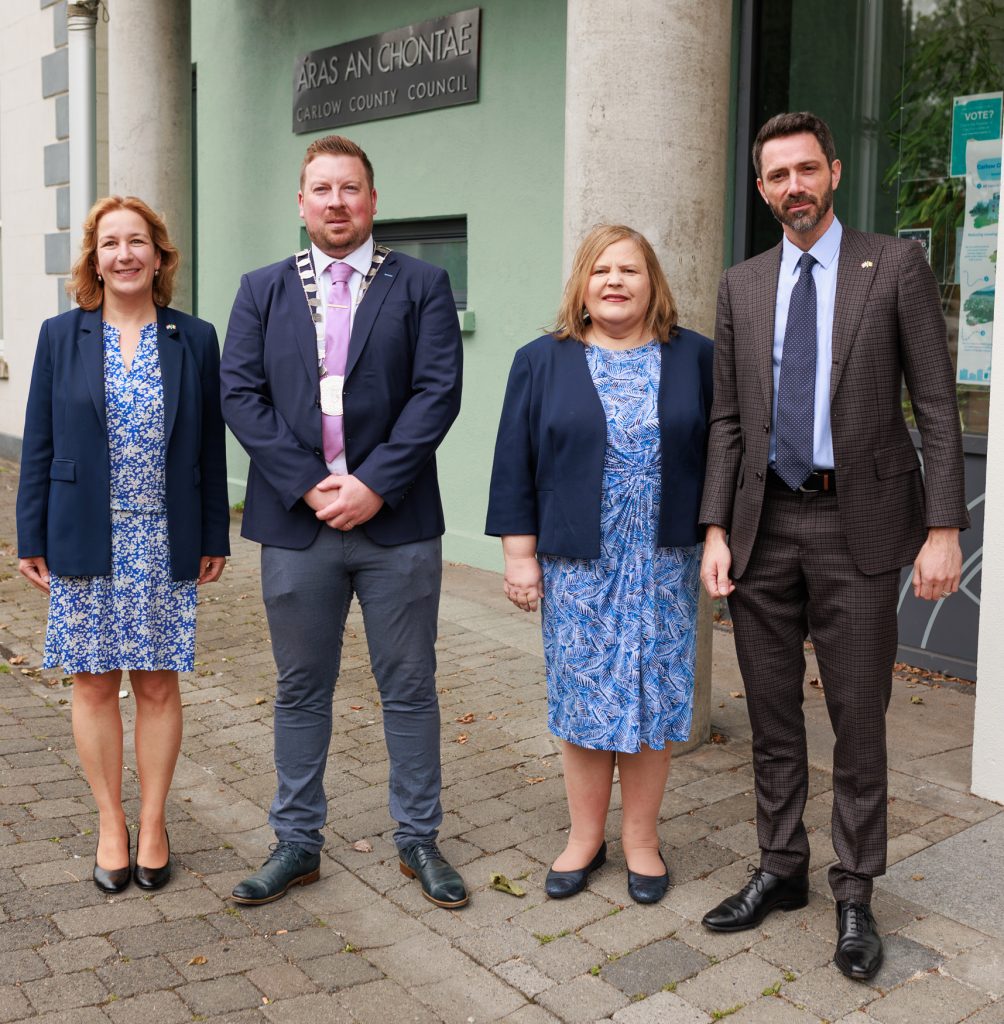 Ambassador Ensch was in the county to retrace the medieval connection between Carlow and Luxembourg through St Willibrord, Patron Saint of Luxembourg and the First Apostle of the Netherlands. In AD 690, one thousand and thirty-two years ago he along with twelve others departed down the River Barrow after spending twelve years at the famed County Carlow monastic settlement of Rath Melsigi and undertook his celebrated mission to the continent.

Over the course of the day Ambassador Ensch met with the Cathaoirleach, Members of Carlow County Council, Council management including Kathleen Holohan, CE, Bishop Denis Nulty and representatives of St Laserian’s Cathedral in Old Leighlin. Ambassador Ensch is the first resident Ambassador of Luxembourg to Ireland, being appointed in November 2021. She was accompanied on her visit by Mr. André Flammang, Deputy Head of Mission and Consul. The visit was also significant in that this was her first official visit outside of Dublin and her first visit since moving full time to the country in recent weeks. Ambassador Ensch stated that it was appropriate that her first visit outside of Dublin should be to County Carlow, where the strongest links between the two countries began in the 7th century. 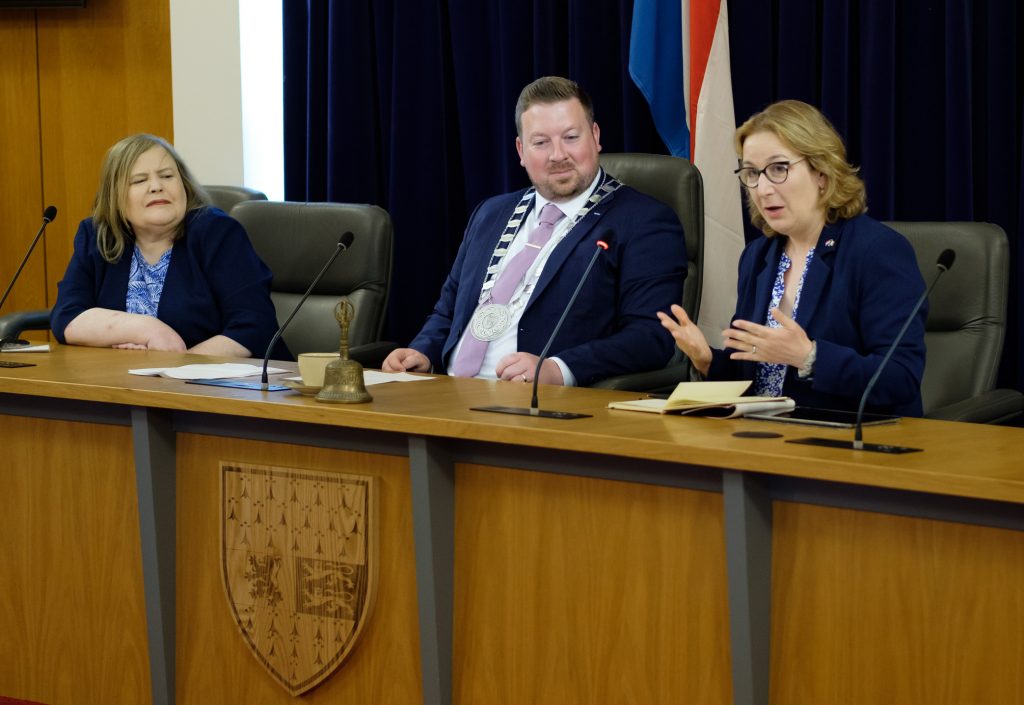 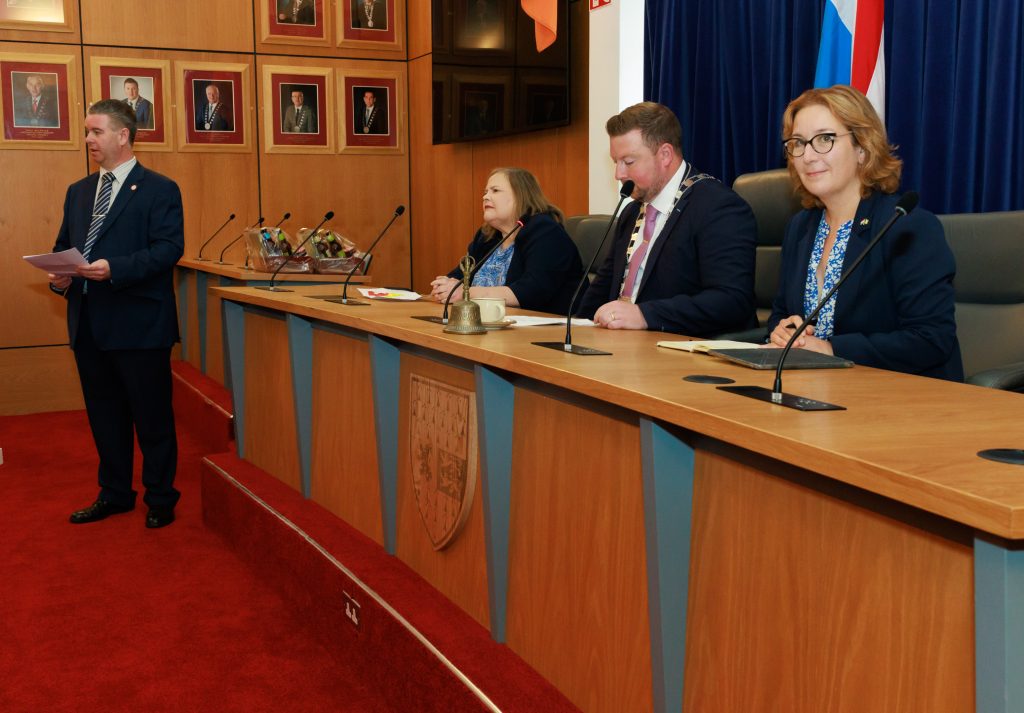 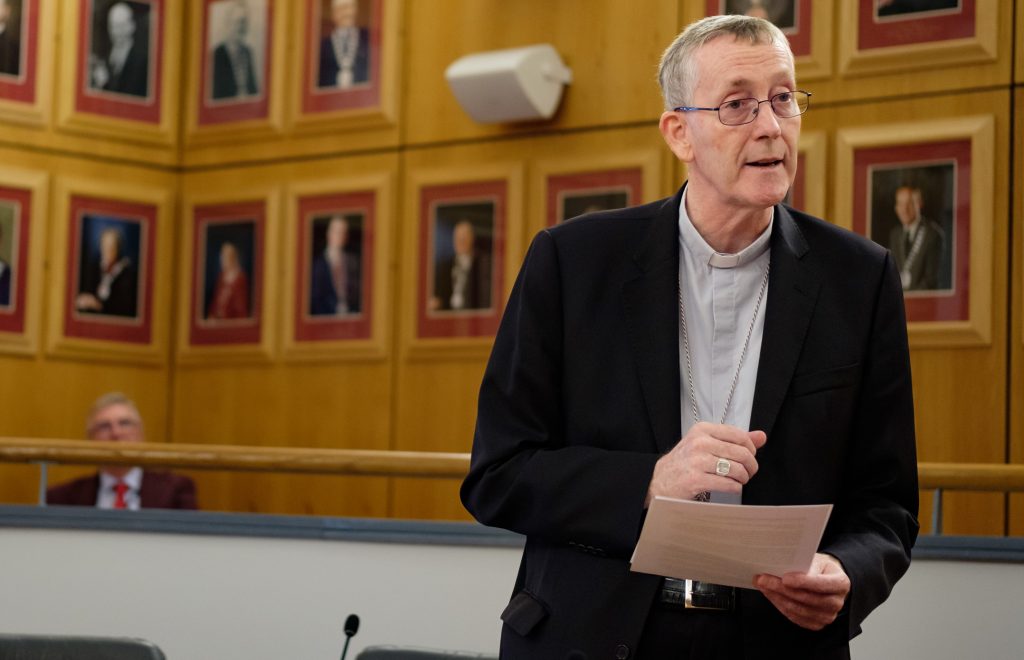 Above image left: The Most Reverend Denis Nulty, Bishop of Kildare and Leighlin, welcomed Ambassador Ensch, and her colleague Mr. Flammang by stating that he was “delighted you both have come to visit us and in doing so to retrace the steps of Willibrord and his companions who brought the faith and culture to Luxembourg. You are most welcome, and we look forward to deepening our ties and connections, may this be the first of many such visits”.

In welcoming Ambassador Ensch to the county, Cllr. Brian O’Donoghue, Cathaoirleach of Carlow County Council, said “as part of the historic visit Ambassador Ensch visited the site of Rath Melsigi, Ireland’s most important ecclesiastical settlement in the 7th and 8th centuries, where Willibrord spent twelve years being trained under the guidance of St. Ecgberct of Rath Melsigi and Iona. She stood beside the restored medieval Cross of Rath Melsigi, all that now remains of this famous monastery in County Carlow. This cross symbolises a significant connection between County Carlow and Echternach, Luxembourg’s oldest town, where Willibrord established his major European monastery”.

Ambassador Ensch stated that “I look forward to building on the strong historical and cultural ties that exist between Carlow and Luxembourg, thanks to Willibrord and Echternach. It is my wish that the resident Luxembourg Embassy in Ireland will help unlock new opportunities for cooperation also in other areas. During our memorable visit, we were delighted to discover the numerous attractions that County Carlow has to offer. Thank you to all involved for the wonderful Carlovian hospitality.”

As part of the visit Ambassador Ensch visited several locations in the town and county with Willibrord connections. In the Cathedral of the Assumption, she saw the Relic of St Willibrord which is on permanent display since 2017 when it was presented by the people of Echternach to say ‘Thank You’ to County Carlow for instilling in Willibrord his missionary zeal. In Carlow County Museum, as well as getting an overview of the county’s history, she viewed the specific Willibrord exhibition that summarises the importance of Rath Melsigi and the impact of Willibrord’s mission. The Ambassador also paid a courtesy visit to Visual. 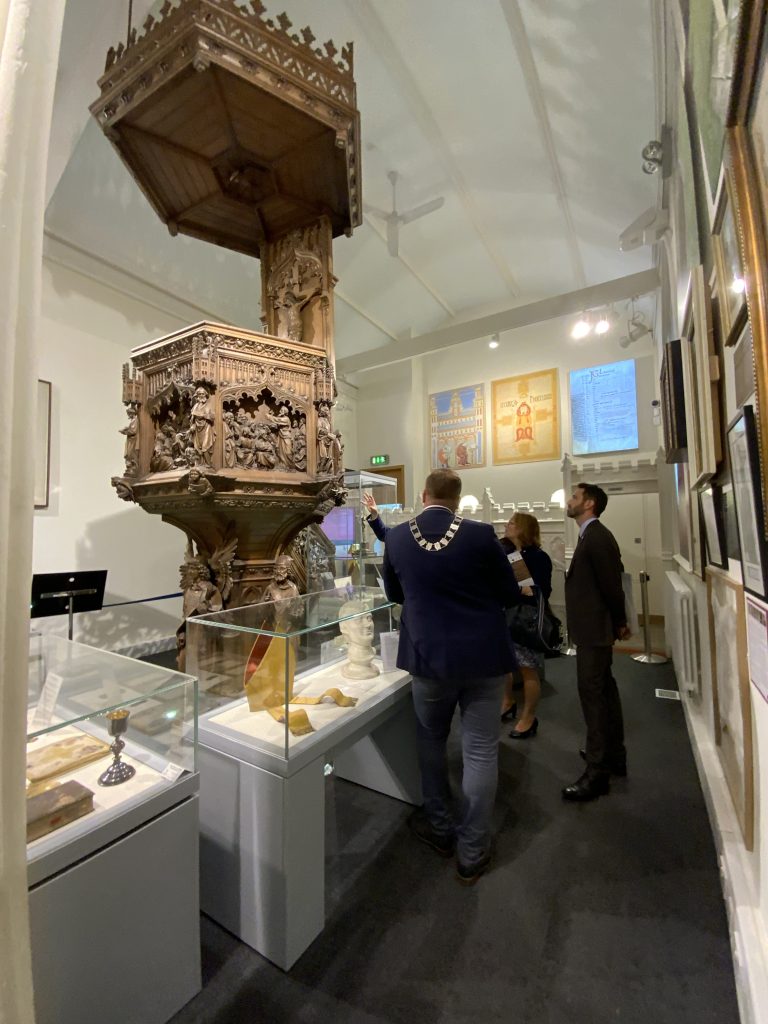 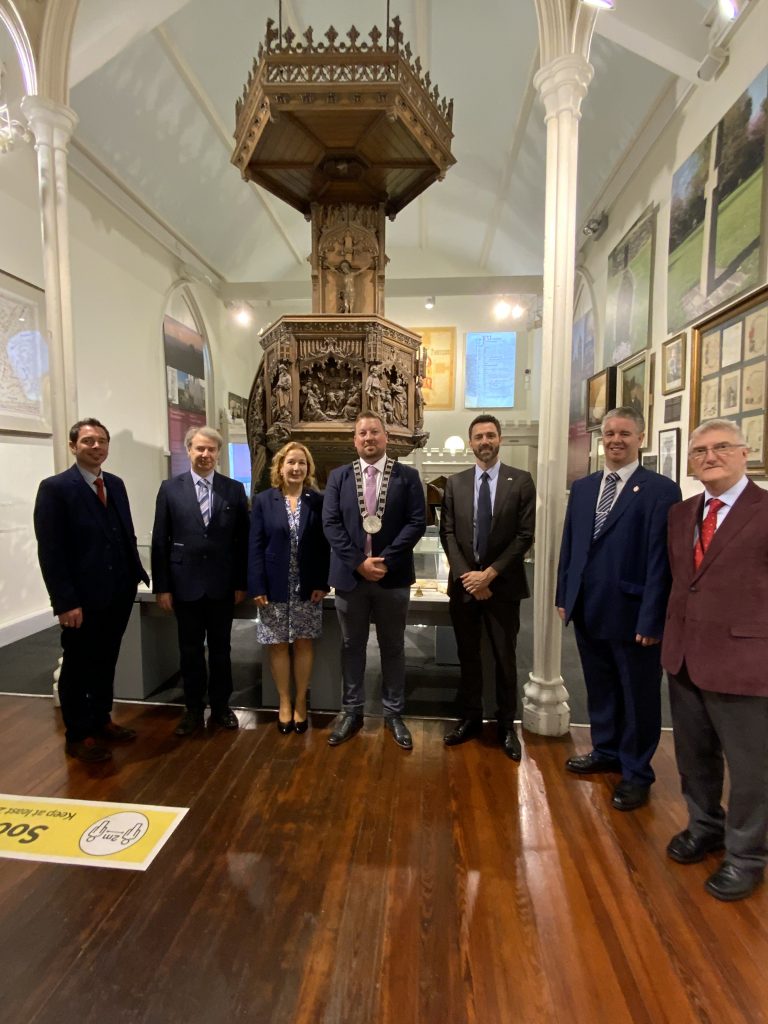 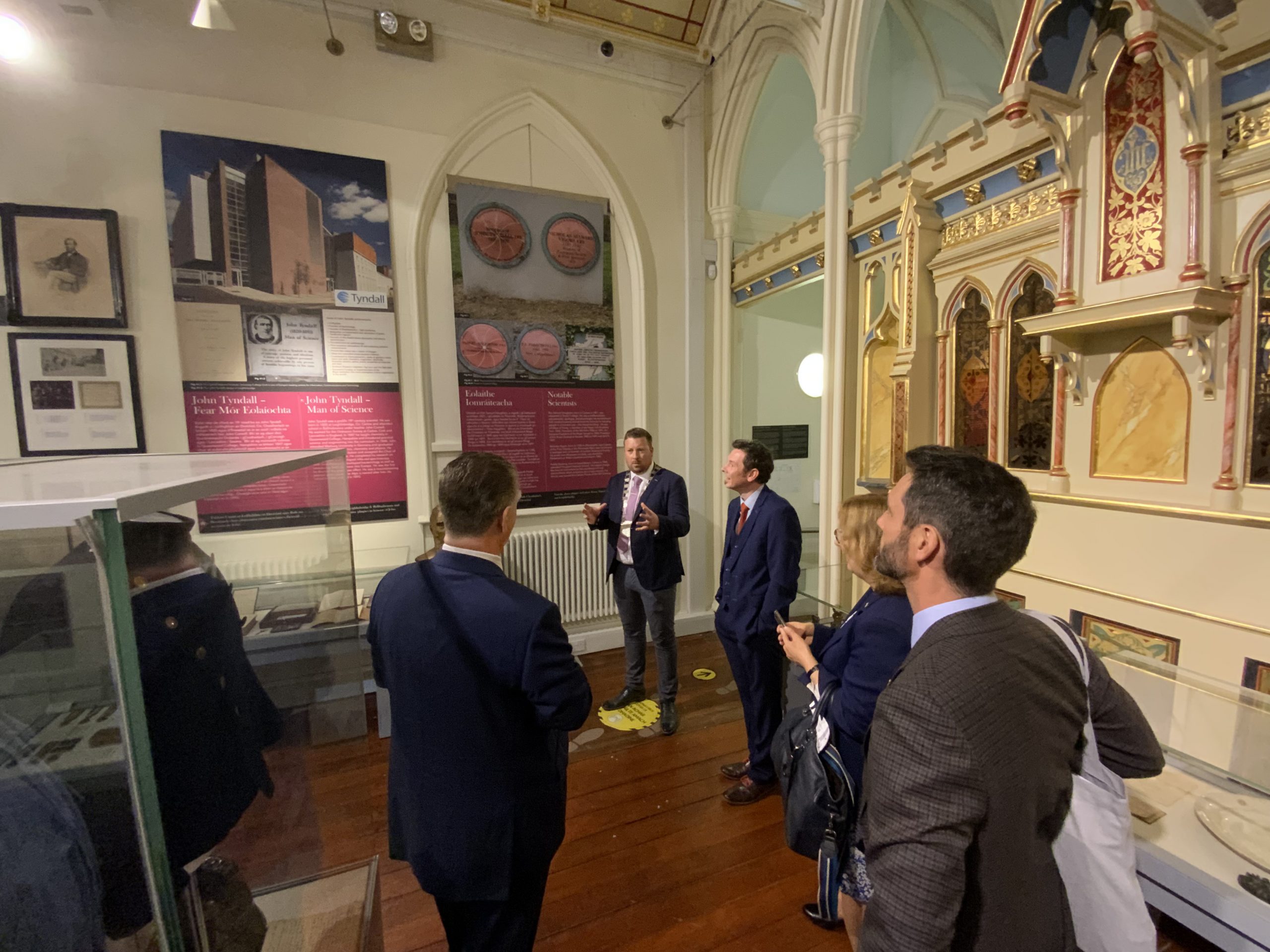 In the afternoon she stood beside the medieval cross of Rath Melsigi thus continuing the one thousand-and thirty-two-year connection between County Carlow and Echternach. 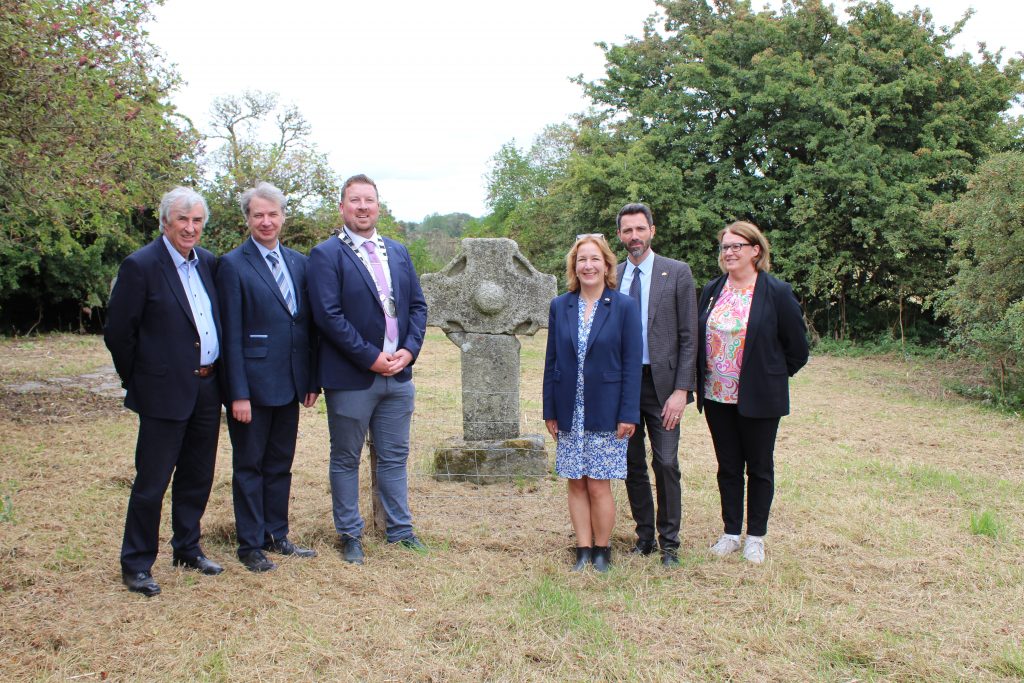 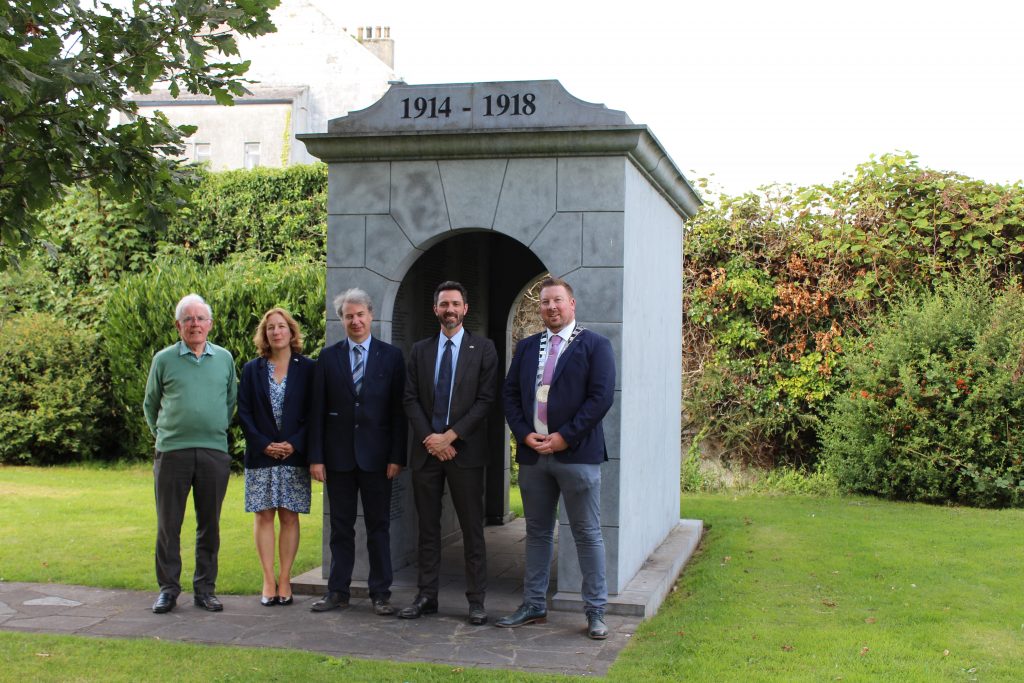 Ambassador Ensch was delighted to meet with Mr Martin Nevin in his home village of Leighlinbridge and have a tour of the Garden of Remembrance with him. Martin was one of the fist people that the Willibrordus-Bauverein (Willibrord Foundation), Echternach, Luxembourg, contacted in County Carlow over twenty-three years ago and he facilitated their first visit to the area with the late Austin O’Neill. Below, Martin is showing the Ambassador the world influence of Leighlinbridge native, John Tyndall. A poignant moment for reflection was when the delegation paid their respects at the County Carlow World War I memorial which was unveiled in 2002.

At St Laserian’s Cathedral and the nearby Holy Well in Old Leighlin she continued her journey of retracing Willibrord’s footsteps as the Cathedral was the then site of the earlier monastery at which the Bishop of Leighlin resided and where Willibrord and his colleagues would have been ordained in advance of their mission which left in AD690.

Recently, Luxembourg native and graduate of Trinity College, where he studied St Willibrord’s European impact, Dr Michel Summer summarised the international importance of Willibrord and Rath Melsigi by stating “there are few individuals whose career illustrates the cultural, religious and political ties which existed between Ireland, Britain and the continent in the early Middle Ages as much as Willibrord’s. His many journeys, which reached from Ireland to Rome, shows that the late seventh and early eighth centuries were not a ‘dark age’ but a crucial stage in the formation of the networks that connected Carolingian Europe”.

St Willibrord is honoured each year by the people of Echternach when they host a UNESCO World Heritage Status ‘Hopping Procession’. Later this year, in Luxembourg, a major exhibition looking at the international perceptions of Luxembourg City and Echternach over the last three centuries will be opened. It is believed that County Carlow’s connection will form a part of this important exhibition.