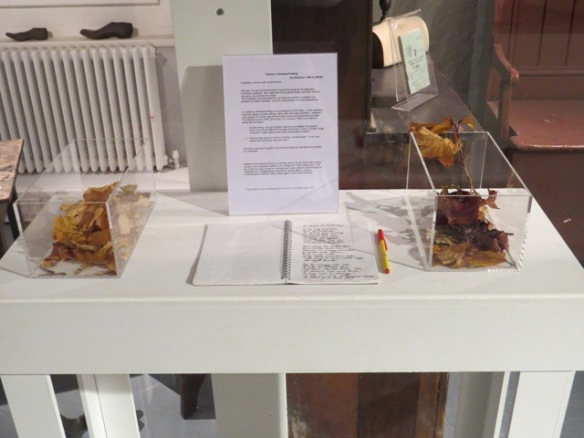 In our first blog of 2015, Katherine Anne Monica McGill outlines her project ‘Granny’s Christmas Pudding’, an installation that took place in Carlow County Museum from February to July 2014. It was previously part of a series of installations by Dun Laoghaire Institute of Art, Design and Technology (IADT) students in Visual Carlow in December 2013.

‘Granny’s Christmas Pudding’ was an installation acknowledging obsolete and disappearing information and skills.  Our modern world has superseded a lot of the old ways; others are lost to us now because people – like my Granny – have gone to their eternal reward.  Such people took with them the expertise they carried so easily at their finger-tips.  With the flippancy of youth, I omitted to garner such skills before it was too late, and now I do my best to recall them from hazy childhood memory.  I imagine this is a common experience, as applicable to other people as it is to me.

The installation itself comprised fallen leaves I collected in Autumn 2013 from beneath the trees at Carlow College (St Patrick’s College) in Carlow town, and a notebook in which I wrote the information in “joined up” handwriting.  I used an old fountain pen and ink.  It remains with Carlow County Museum for future reference. Visitors were encouraged to collaborate in the display by including in the note book any disappearing skills they recalled.  Using Gregg shorthand (itself also a disappearing skill), I wrote various data on the leaves.  Older people might remember learning this by rote in their primary school days. Younger people might be intrigued to re-discover it. Included, for example, are old conversion tables of weights and measures.  These now seem so quaint: quarts, minims, bushels, perches, roods and leagues; old legal tender (pounds, shillings and pence), Morse code (long and short sound signals representing letters and numbers), some poetry, and commonplace prayers in Latin.  This project augmented my own knowledge: how to bone shoes was definitely new to me!

Most important of all, I discovered that Carlow people of a certain age remember with affection drinking Corcoran’s Mineral Waters, so I particularly appealed for anyone who might know the recipes or their whereabouts to include this in the notebook.

Why write on leaves?  Because they naturally become brittle and disintegrate, so the skills and information the leaves carried are once again apparently lost.  The project also echoed papyrus (another plant leaf) used by ancient peoples to record their important information.  Even though the information has been decoded, some of it is still obtuse to us today.

On the last day of July 2014, when the New Year’s leaves were fluttering on the trees at Carlow College, members of Carlow County Museum kindly agreed to crumble the leaves of the installation at Carlow College grounds.  The process was recorded by Museum staff.  It was a fitting end to a display inaugurated in February.

My heartfelt thanks are given to Dermot Mulligan, Museum Curator and the staff of Carlow County Museum for their enthusiasm for my installation; to Cora Cummins, Print Tutor at IADT Dun Laoghaire and Emma Lucy O’Brien of Visual Carlow for their initial invitation to consider a Carlow project.  Visual Carlow is thanked for lending some equipment.  The visitors to Carlow County Museum are especially thanked for their many contributions to the notebook.  Thirty pages of responses exceeded my most optimistic expectations.  I hope they enjoyed their visits to this wonderful Museum and their collaboration.

And what of Corcoran’s Mineral Waters?  All is not lost, apparently.  Unlike my Granny’s Christmas pudding, it seems there is yet someone in Carlow who may hold the precious knowledge.  Perhaps some day soon people will be able to say with relish again “Ah, Corcoran’s!”

Katherine Anne Monica McGill under took this installation as a 3rd year student on the Visual Arts Practice course in Dun Laoghaire Institute of Art, Design and Technology (IADT). The aim of this four-year course is to educate and inspire student artists through an integrated and multidisciplinary experience, helping them to create a comprehensive portfolio of work, tested against ‘real world’ situations. Carlow County Museum was delighted to host Katherine’s work.