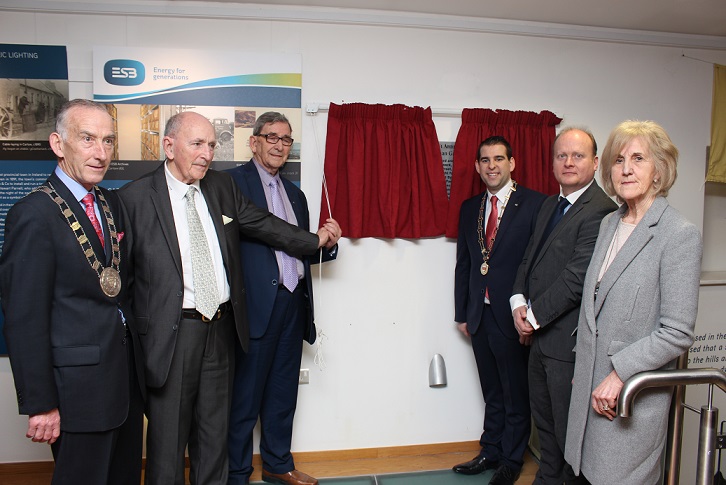 On Saturday 11th March 2017 the Carlow County Museum temporary exhibition gallery has been dedicated in honour of the O’Hanrahan Family/ Uí Annracháin for their contribution to Irish independence. They lived at 90 and 91 Tullow Street in the late 19th and early 20th century. The dedication and plaque unveiling was performed by Pearse O’Hanrahan, great grand nephew of the Richard and Mary O’Hanrahan, and grandnephew of their children Harry, Micheál, Edward, Áine (Ciss), Máire and Eily. Richard was a member of the Fenian’s and 2017 marks the one hundred and fiftieth anniversary of their rebellion in 1867. Pearse was accompanied by his brother Harry and several other O’Hanrahan relations were present including Deirdre Lawlor a grand and great grandniece of the O’Hanrahan’s being honoured.

Speaking at the dedication Pearse O’Hanrahan, who had travelled from Dundalk, said he was very pleased that the entire family were being honoured and he thank both Carlow County Council and the Museum Board for the gesture. To those present at the dedication it was clear that Pearse spoke from the heart when he mentioned all the family members and their roles. They were involved in the many organisations including the Irish Republican Brotherhood, The Irish Volunteers and Cumman na mBan. He gave special mention to the three sister Áine (Ciss), Máire and Eily who were all born in Carlow and that they had a proud and important role in the Rising. He focused on how the family home in Dublin was at the centre of the creation and storing of the arms that would be used in the Rising. Importantly, despite being raided by the British army no arms were ever found in the house and this was something the sisters were very proud of.

Cllr. Fintan Phelan, Mayor of the Municipal District of Carlow and Chairperson of the Carlow Ireland 2016 Committee said ‘the O’Hanrahan family made a huge contribution to the 1916 Rising and to life here in Carlow. It is therefore very fitting that this gallery is dedicated in honour of them’ and that they lived very close to where the Museum is located today.

Cllr. Fergal Browne, Chairperson of the Board of Carlow County Museum speaking as Gaeilge in honour of Micheál being a founder of the Carlow branch of Conradh na Gaeilge spoke on the importance of Irish culture to the family and the role they played in promoting this and especially the language.

This exhibition gallery, that has been dedicated to the O’Hanrahan family, displays the Museum’s rotating and temporary exhibitions. The current exhibition, The Quiet Revolution, the 70th Anniversary of Rural Electrification will be finishing in the next two weeks and will be replaced by an exhibition on St Willibrord, Patron Saint of Luxembourg and his Co Carlow connection.

Many thanks to Paul Curran, Carlow County Council for the images in this post.