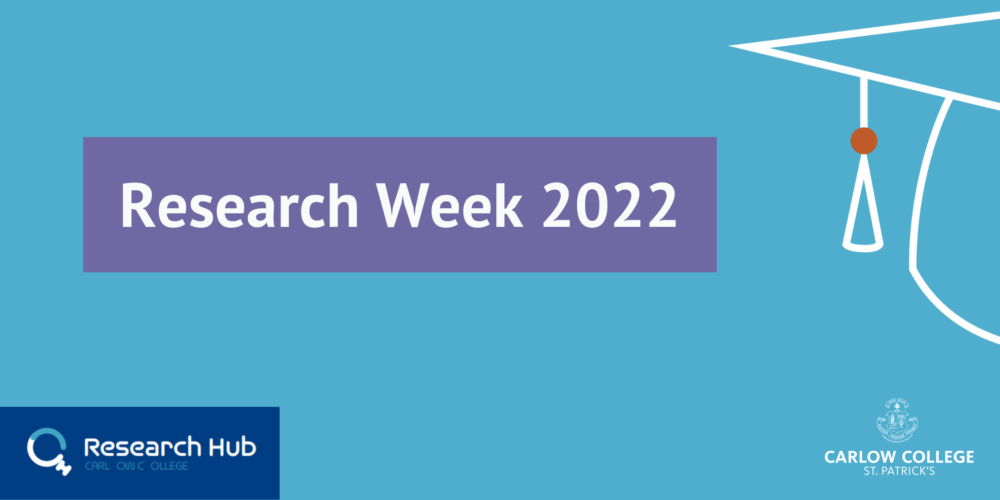 Carlow College, St. Patrick’s Arts, Humanities and Social Sciences’ ‘Research Hub’ is an important local and regional centre of research and knowledge, which is disseminated through the provision of programmes of education, publications, conferences, inter-institutional collaborations, and public events.

Research Week was the first such event through which the Research Hub celebrated and acknowledged the active research efforts of staff and students, as well as being a platform for information sharing within the College and wider community. 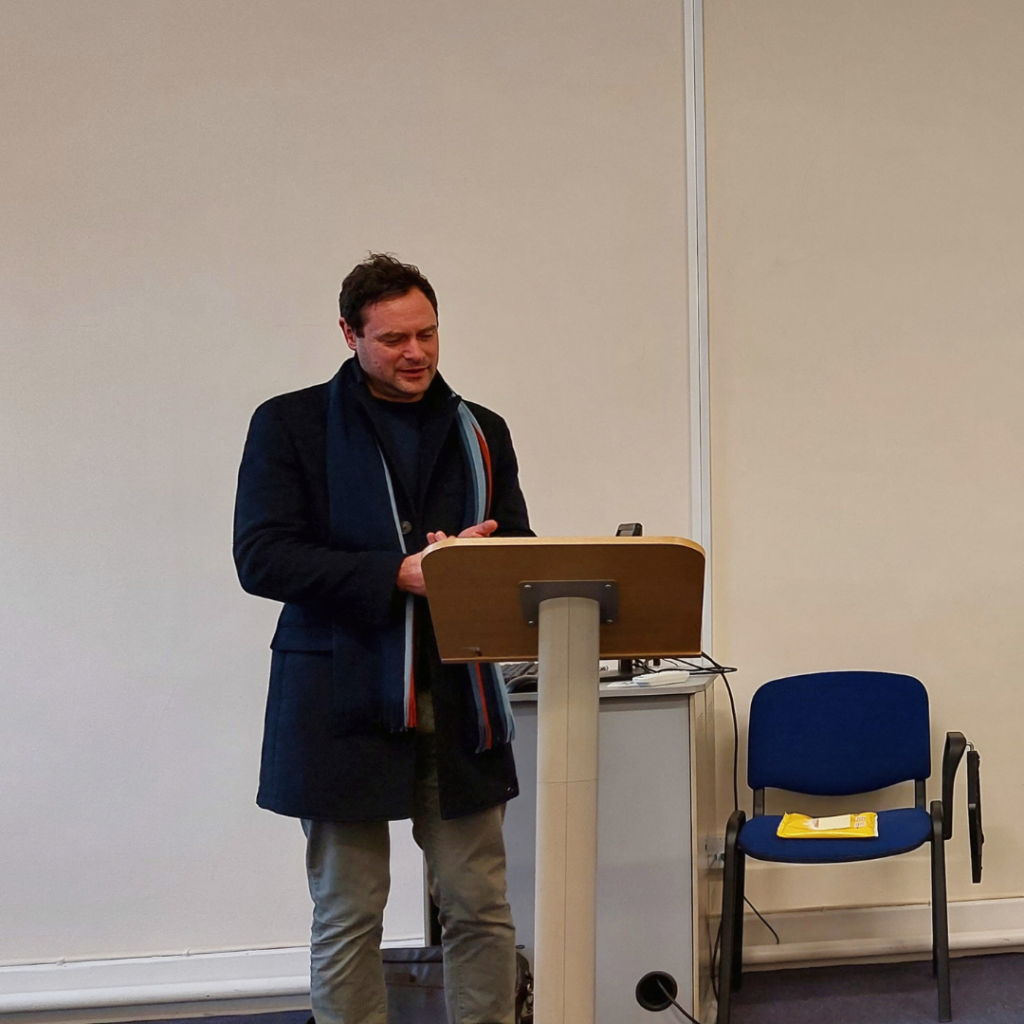 The comprehensive four-day schedule commenced with a philosophy lecture by Dr Noel Kavanagh, who fittingly for Valentine’s Day, explored how the ideas of love in some of the best-known plays and novels on the leaving cert course have their source in Plato’s Symposium, a book written in 385BCE. 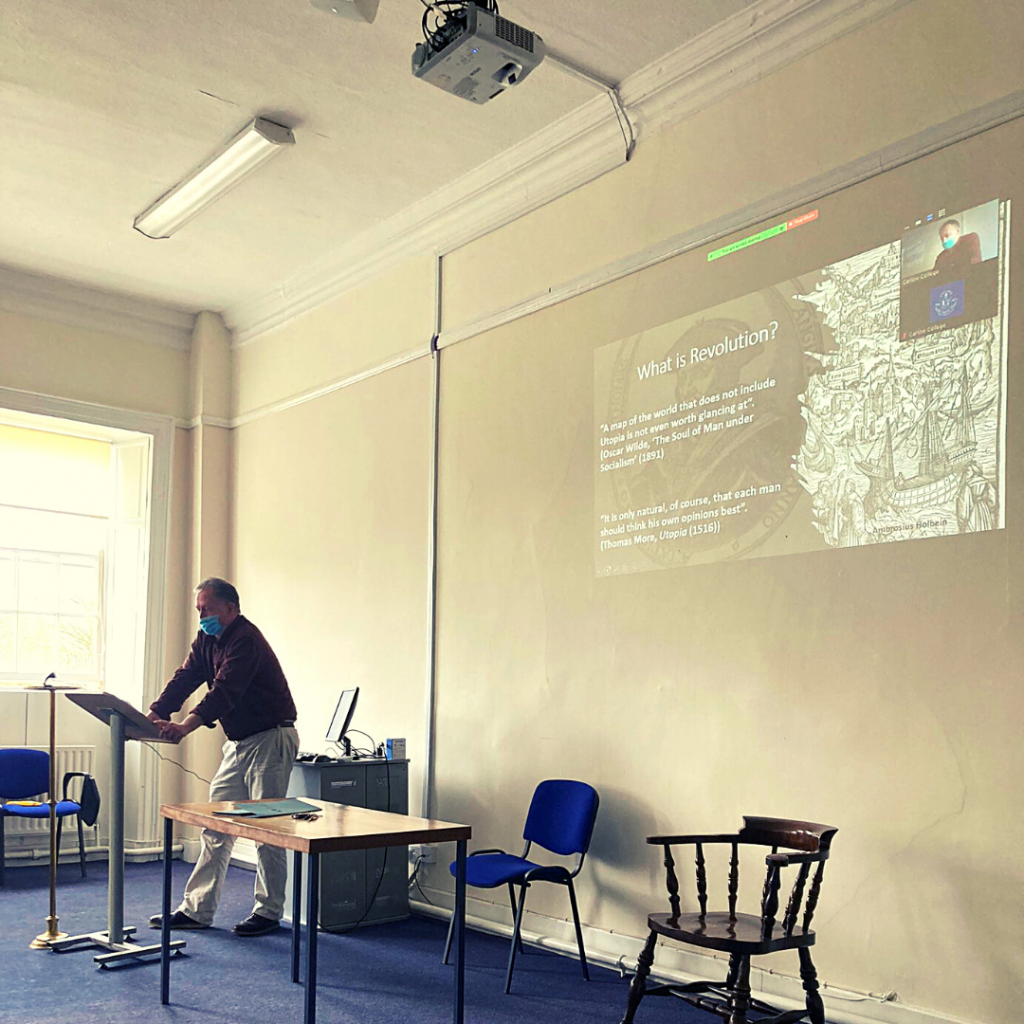 On day two of Research Week, an in-person and livestream lecture was delivered by Dr James Heaney, who discussed the important connections between literature and republican ideology, through referencing work by a range of contemporary authors and political figures (including W.B. Yeats, Ӕ (George Russell, Constance Markievicz, Miguel de Unamuno). His lecture drew attention to ways in which their writings express key republican ideas and values such as freedom, equality, and fraternity.

Later that afternoon, Carlow County Museum’s Curator, Dermot Mulligan contributed to a roundtable session featuring four short presentations on the interesting aspects of Carlow’s history and heritage, with a special focus on buildings and monuments.

Dr Margaret Murphy of Carlow College opened the roundtable with a fascinating overview of her research on the topographical development of Carlow as part of Irish Historic Towns Atlas Project (IHTA). The IHTA project was established in 1981 The Royal Irish Academy (RIA), with the aim of recording the topographical development of a selection of Irish towns both large and small. The Irish Historic Towns Atlas is also part of a wider European scheme, with towns atlases containing broadly similar information available for several countries, thereby enabling Irish towns to be studied in their European context. Further information about project can be found here https://www.ria.ie/research-projects/irish-historic-towns-atlas

Dermot Mulligan then gave a detailed presentation titled ‘The Hartpole Effigy: the return of a piece of Carlow’s sixteenth-century heritage’. Dermot’s presentation gave an overview of a multi-agency and partner-coordinated project, which sought permissions, licencing and funding to restore the grave effigy of the 16th century Constable of Carlow Castle and High Sheriff of Carlow, Robert Hartpole, and transfer it from Portarlington to its new location at Carlow County Museum. Dermot outlined how this special heritage project was also made possible by new funding streams made available under the Community Monuments Fund of the Department of Housing, Local Government and Heritage.

To read more about this historic project please visit: https://carlowmuseum.com/16-century-effigy-of-robert-hartpole-returns-to-carlow-town-from-portarlington-after-c-200-years/

Dr Elaine Callinan of Carlow College then took the floor to give an absorbing presentation titled ‘Carlow in the seventeenth century: evidence from the 1641 Depositions’. Dr Callinan gave insights about the 1641 Depositions and how they gave witness to testimonies given mainly by Protestants, but also in some cases Catholics, from all social backgrounds, concerning their experiences of the 1641 Irish rebellion. The Carlow testimonies document the loss of goods, military activity, and the alleged crimes committed by the Irish insurgents, including assault, stripping, imprisonment and murder within the region, providing a unique source of information on the social, economic, cultural, religious, and political history of seventeenth-century Carlow.

The session was concluded by Dr Eoin O’Sullivan, Heritage Officer of Carlow County Council, who spoke in very clear and relatable terms about his complex role of promoting the heritage of Carlow in his new appointment as Heritage Officer for the county. During only a short time in the role, Dr O’Sullivan has already initiated several new Heritage schemes for the County, explored new funding opportunities and engaged widely with the community in relation to Heritage projects, with many exciting initiatives anticipated to follow. To find out more about Heritage in County Carlow, please visit http://www.carlowlibraries.ie/heritage

On day three of Research Week, attendees enjoyed a lecture by Associate Professor of Sociology at UCD School of Sociology, Dr Kieran Allen, who explored the relevance of classical sociology for our times through an exploration of the insights of Marx, Durkheim and Weber.

The final day of the busy week-long programme was to feature two events, a lecture on Food and Climate Action relating to the Meat Industry, which was delivered by Dr Anne Coakley, and a second roundtable focusing on Research Dissemination, Chaired by Dr Ida Milne with Dr Geraldine Canny (Research Manager, WIT), Jim Carroll (RTÉ Brainstorm) and Maria O’Donovan (Cork University Press), which is to be re-scheduled due to unforeseen circumstances.

We would like to extend our thanks to Carlow College, St. Patrick’s Research Research Hub for inviting us to contribute to the week and wish them well in all their future endeavours.

Her Excellency, Florence Ensch, Ambassador of the Grand Duchy of Luxembourg to Ireland, visits County Carlow and reconnects with out joint medieval Heritage